Precisely one year and one month ago, I wrote my first post for this little life update thing I wanted to keep up to date. As it has been over a year, you can imagine my loose interpretation of up to date. Also, the last post stopped after mentioning some service that I had the pleasure of doing, leaving my suggestion that I'd talk about personal projects and fun as a bit of a cruel joke. Despite my best efforts, however, I did have a great time and also manage to be productive in my research as well, meaning it's time to wrap up another academic year's worth of toil in a short blog post.

I'll follow the format of last year's post with activities related to Research coming first followed by Service activities. I am leaving off my personal projects as of now, like last year, though I may decide to elucidate them at some point in the future.

I have expanded my research focus slightly, in the past year. A quick glance at my CV will still show a strong focus on nuclear reactions, though I have also turned my attention to investigating various functionals as well. The 2018 tensor interaction study I was involved in with Lu Guo and Sait Umar was my first foray into these sorts of questions and we found some interesting results. So interesting, in fact, that we've followed it up with more analysis and looking at some different nuclear systems in a recent article that has been submitted for publication. In the same vein of those projects, I've also implemented a version of the quark-meson-coupling energy density functional in a development code. This remains unpublished, but I'm hoping I can open source these implementations before too long after I clean up the code base and put in the most recent QMC functional.

In fact, a good portion of the last year has been in extending our computational abilities beyond the standard optimizations that I typically play with. Since many of these lie in my to-do pile, I'll let them rest peacefully until it's their time to shine. Moving in parallel with those projects, however, has been the application focused studies investigating quasifission and fusion for specific systems. The quasifission paper in particular was a compuational feat in itself, with 148 full TDHF calculations being required to fully investigate the 48Ca + 249Bk system. The tools I built to automate much of the data processing and figure production made my life so much easier and I'm already using them a bit in another multinucleon transfer paper that is in preparation. Here's hoping my computers get a rest soon and I can start analyzing those results.

This year has also been fruitful on the travel front, both science related and personal. It started off with another insanely productive trip to the Australia National University (ANU) to work with Cedric Simenel again. While it didn't immediately lead to publications, we reconvened in the summer to finish up some projects which led to the two most recent articles mentioned above. I also took a trip down to the coast to join their department's Workshop on New DEvelopments in nuclear Reactions (WONDER) and, despite the dubious acronym, had an excellent time learning about everyone's research.

Though it was not to be my last workshop experience, for I also attended an excellent summer school on machine learning in nuclear physics hosted at Michigan State University in May. While brief, it was comprehensive and we were whisked through the foundations of machine learning and some applications in science. The hands-on sessions were likely my favorite part, as I relish a good computational challenge. It also got my mind moving on how these tools could be applied moving forward in my own research, which is always my goal from a workshop or summer school.

Finally, I was granted the honor of attending the Lindau Nobel Laureate meeting in physics in June/July, an experience I'll not soon forget. Over the week long program I experienced stimulating discussions from both young scientists and Nobel laureates all while basking in the warm Lindau sun. I made some great friends from many fields of physics and opened my mind to the current challenges of areas of research separate from my own. This external focus led to its fair share of introspection, giving me motivation to expand my purview a bit when it comes to the science that I engage in.

In all, I have had an incredible string of experiences this year that resulted in fruitful scientific collaboration, deeper understanding of some technical tools, and a general eye opening in my approach to science. I can only hope to have as varied an experience as we move into 2020!

For the most part I have not been as active as I usually am when it comes to outreach and scientific communication this year. It's something that I hope to improve moving forward, but I'm still very happy with what I've been privileged to be a part of so far. Principal among outreach efforts was my participation in the Letters to a Pre-Scientist program which is a hyper-focused outreach effort where scientists get matched with a young pen pal and they exchange letters throughout the school year. I very much enjoy the tailored, personal connection that comes from only engaging with one student throughout the program and I thus was a bit sad when the year came to an end. I'll certainly be joining their program again and I appreciate the organization that must go into wrangling so many children and children-esque young scientists.

I was also asked to contribute a small blog post for the Lindau meeting's website which can be found here. I drew primarily on the experiences I had at the MSU summer school, but I tried to keep it at a relatively high level. I'll post that as its own article on this site for continuity's sake, but definitely check out the other posts on their blog for some interesting stories and experiences shared by other contributors. 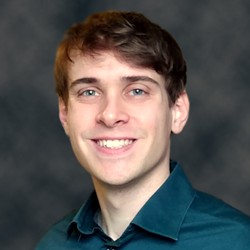 I use computational techniques to study a wide range of nuclear and nuclear-adjacent physics.